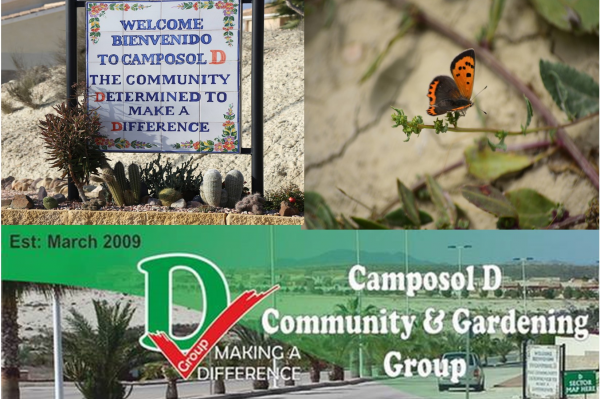 Camposol as an urbanisation has been in existence since 1997. The last houses were built in approximately 2009, with the majority having been built, between 1998 – 2004, so some 10 -15 years ago. Camposol now, in 2020, whilst having a high percentage of British residents, also has a diverse population of Spanish, British, Dutch, French, Belgium, Norwegian, Swedish and German residents, making Camposol a real European development.

There are around 4,500 properties on Camposol, which boasts an 18-hole golf course, has 2 commercial centres, a state run and a privately run medical centre, a bank and a post office. There is also a high street chain supermarket and petrol station. Camposol, now has all the amenities that you would expect to find in any Spanish village, the only difference being is that has all been built within the last 20 years.

Following on from our previous articles about each sector of Camposol we now focus on sector D, the largest of all the sectors with regard to both properties and residents. There are more than 1,700 residents on sector D according to our last set of statistics.

Before the end of 2001, all the plots for sale on C sector on Camposol had totally sold out, but the demand for properties was still increasing. Masa, the building company responsible for building the majority of Camposol, therefore decided to extend the project and built many more villas on the area known now as Sector D.

Every sector of Camposol is unique in its’ own way but D sector, is often the sector of choice, because it is the furthest away from the commercial centres and facilities which for many, is the best reason in the world. Some people simply want a tranquil and peaceful location with lovely countryside views. D sector is often referred to as “The Suburbs” of Camposol, which is a perfect description. There are many mountain trails and established walking paths in this region, and the views are spectacular. The countryside lovers amongst us, simply love this part of the urbanisation.

The need for some sort of organised group became apparent as far back as 2008, when the D Community and Gardening Group was officially formed. This is a very active group as it combines both gardening and the whole community, and is run as a legal entity and all by volunteers. This group was originally founded by Michael Drummond, Bob Owen, and Les Crook (affectionately referred to as The Three Amigos) as it was obvious by 2008 that if the area was to be kept clean and tidy then a lot of work would have to be done, by volunteer groups and not relying solely on the local council. For example, one of the first projects was to acquire 80 extra rubbish bins. Other projects included gravelling between 4 and 5 kilometres of the perimeter, which was a hugely ambitious and successful project.

Once the group had gained some momentum other projects were carefully planned which included repairing pot holes, the purchase of a trailer to assist residents with removal of green waste. Unfortunately, due to the sheer volume of the green waste the Council had to ask us to refrain from taking it to the ECO park. Other attempts were made to solve this problem including compost pits, fire pits etc which were eventually also banned. A second trailer was also purchased as was a “tow car”. This car and trailer are available to residents too, just contact the team.

Clearly, all of the above needed funding, so as the money from the bucket collections increased a bank account was opened and the group was set up as a legal entity with the assistance of the local council. As the momentum of the group increased, roundabouts were tidied and gravelled, bulk supplies of weed killer and equipment were also purchased and put to good use. Two petanque courts were also built, and pot holes were repaired as they appeared. Things were really improving.

By 2014 The “Three Amigos” had really “done their time” and resigned their positions and the money, trailers and cars were handed over to the new committee. A full list of current committee members can be found on our Facebook page until our new web site is up and running or look at the back pages of this publication for more information.

Recent projects include The Jane Taylor Memorial Garden, two pentanque courts with one lane on D10. The other 3 lane court is on Calle Piteras and now has a games table. It is open for everyone to use, so why not pop along and arrange a game of chess or draughts?

In July 2019, Patricia Ridler took over the position of “President” for D Community and Gardening Group and had an enormous task ahead of her as there is still much to be done. Fund raising is a key issue as with any volunteer group. The social secretary had well planned out events throughout the year, and these events are very popular and usually bring in sufficient funding to back these projects. Sadly, this year, due to the Covid 19 crisis, many events have had to be postponed but they will be back. There is still the possibility that the street party, and the hog roast could still go ahead but it is too early to confirm at this stage, so please watch out for further updates.

The group is actively seeking volunteers, and it is not just about gardening. We need help in so many areas which include, fund raising, helping at fund raising events, bucket collection, administration, updating the new website (soon to be available) and keeping our Facebook page up to date, and spreading the news. If you have any writing skills, or any marketing experience we would love to hear from you. For a start, if someone could just contact all the local magazines, radio, newspapers etc with our updates it would be a huge help.

Our bucket collections are held weekly, every Friday 9-11am by the “Hut”, which is next to The Jane Taylor Memorial Garden, on the main road “Avenida De Los Covachos”. Please put a little extra in at this time as with none of our fundraising events being guaranteed we are going to need a little extra help!

There have been several other D sector related Facebook groups, which is very confusing for newcomers. Some are out of date; some have just been left to “fade away”.

We fully intend to have this sorted out within the next few months so it is clear to all where to go for all the current news and views. Please look out for further updates in the back pages of this publication as any updates will be on Camposol Community and Gardening Group. This is a recognised legal entity with the correct registration number.

Usually, when we write about a Camposol Character, it is about someone that we all know and usually with a big personality that we can all relate to. Whether that be a local business man or a member of the public is not important but usually it is because we have received a nomination about someone. Our character for this article has no name, and wishes to remain anonymous. He is known as “The Lone Gardener”. This man is out there every day working from daybreak for hours at a time. He has been spotted trimming palm trees, spraying weed killer along the whole main carriageway. After 15 years, he has also gleaned a great deal of knowledge about gardening in the “campo” and is happy to chat and share ideas with anyone but wants no reward or recognition for his efforts.

His latest project is a walk! From the petanca court on D10 over the hill towards D9. He has spent 224 hours of hard work making this a lovely walk. The Lone Gardener is constantly adding new ideas such as adding seating along the route. I think we should all try this walk, and take the time to thank “The Lone Gardener” for all his efforts, what a wonderful man. Shaun Matthews has also made a video of this walk which can be viewed at https://www.youtube.com/watch?v=Bauex9AIy6o.

Thanks, also to another resident photographer, Roger Bayliss who has sent us some stunning photos of butterflies spotted on D sector earlier in the year.

If you would like to be part of this wonderful group please call 604 206 018 or email dsectorphone@gmail.com.

The Remembrance Service will take place on 11th November starting at 11.30am at Camposol Memorial park. 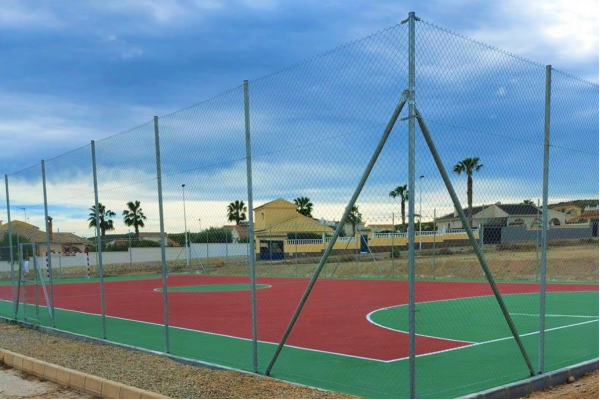 Camposol Football Pitch has finally arrived. Read on to find out how it all came to happen and who were the driving forces.